You are here: Home » LDV Blog » Debra's Blog » The Mystery of da Vinci's "The Last Supper"

The Mystery of da Vinci's "The Last Supper"

The Mystery of da Vinci's "The Last Supper"

It posits that since the original painting was a fresco on a very unstable wall (shared on the other side by a kitchen) in a monastery in Milan, it rapidly deteriorated and has been "restored" so many times, it is but a faint representation of the magnificent original.  And also brings out that due to da Vinci's slow pace, it never could have been completed in the time allotted by Leonardo alone, but was, to a large degree, painted by a host of pupils and apprentices, directed by the master himself.

The exciting possibility is raised and investigated, that there were copies of the original made after France obtained control of Milan, and Prince Louis XII so wanted to bring the painting back to France where it might inspire French art and design, and was so disappointed that it would be impossible to do so, that he hired, of da Vinci, a copy to be painted on canvas in Milan to be taken to France.  But did it happen???  And if it did, does it still exist???  Ah!  MYSTERY!

Of course, this is one of many mysteries surrounding this painting!  I both read the book and thoroughly enjoyed the film of Dan Brown's The Da Vinci Code!

WATCH THE FULL MOVIE AT NETFLIX

This was followed by a plethora of documentaries about the theory behind the book and mysteries a-plenty about the painting.

Little wonder, then, that I so enjoy all these mysteries surrounding both the painting and the painter (what a mind and fascinating biography he had, in many ways, a man after my own heart), because I have my own PERSONAL HISTORY MYSTERY that began with da Vinci's The Last Supper!

This mystery started when my third grade teacher, Mrs. Swift, decided to introduce some great works of art to our class one day.

But as background, even before that - maybe part way through first grade, or there about, I started becoming aware that the universe did not revolve around me, at least not completely, and when I saw, or imagined that I saw, that some of my classmates were not really following what the teacher was saying, I took it upon myself to clarify or to at least openly admit that more information was needed.  If I understood but thought others were confused, I'd raise my hand and say something like, "Do you mean . . . ?" and restate it in terms that made more sense to kids, and it seemed she (all my elementary school teachers were women) would usually say, "Yes," and I imagined I sensed relief from my classmates.  So I became the self-appointed intermediary for my more reticent peers.

So by 3rd Grade, I was nothing if not self-assured (AKA - cocky) in that role!

Back to that fateful cultural lesson where Mrs. Swift would hold up a print of some famous work of art and tell us a little about it, and finally held up this one, as she said, "And this is The Last Supper by Leonardo da Vinci" . . .

I thought, "what is THAT supposed to mean?  THE last supper?  WHOSE last supper?  Silly teacher!" and I stepped up to bat to help out a roomful of oblivious eight year olds, from my seat at the back of the room, and raised my hand, and with a bit of snark in my voice said, "Whose last supper?"

THE MOMENT THAT CHANGED MY LIFE

After a moment of silence, every head of every classmate turned to look at "Miss Know It All" and then . . . they all started laughing!

Mrs. Swift turned beet red and said, "Jesus," and quickly moved to the next painting to regain control of the class without further awkwardness.

But I was having an utterly unexpected "come to Jesus" moment.  A moment where I realized that not only was I not the center of the universe, I was the only child in my 3rd grade class of around 25 students, who did not know perfectly well that the man in the center of the painting with long auburn hair and a beard was Jesus Christ.

Stunned is an understatement.

It didn't compute in my brain.

How was it possible that I could be so ignorant of what was common knowledge to a room full of school children?

And my life would never be the same because of it.

AS A TINY CHILD

I had been taught, not by my parents and not in Sunday School, about Baby Jesus when I was three.  I accepted the story as fact because it was taught me by someone who loved me unconditionally and completely.  But that is all my beloved Susannah had taught me. She was my "surrogate grandmother" who lived across the street from the house where I was born, in Monroe, Ohio in 1958. She took me to her church, next door to her cottage, where she would go, midweek, to light a candle and pray as I observed the light flickering through colored glass and gazed on the statue of a woman in a blue dress with a baby on her lap. Susannah also sat me on her lap in early December to unwrap her Nativity set of porcelain figurines and explain each one and the story of Jesus' birth in a stable.

We moved away within a year, so that is where my Christian education ended.  The rest the story was a MYSTERY I was oblivious about, though obviously, everyone ELSE was much more informed on the matter than I.

TO SOLVE A CHRISTIAN MYSTERY WITHOUT LETTING ON YOU CARE

Now I had a problem.  I most certainly could not rest peacefully knowing that I lacked the knowledge of all my classmates, on the one hand . . . but I also could never submit myself to such ridicule as I suffered that day on the other.  It is rather hard to seek knowledge without asking any questions.  It would be like asking what color the sky was, or what an elephant was, or what the difference was between chocolate and vanilla.  So, I didn't get very far very fast.  I suddenly understood why anyone would not want to raise their hand and ask a question in school, or to be called on, unsolicited, to answer a question.  While I had been laughed at many times, mostly it was because I was trying to entertain my family or classmates or friends.  This was completely different and I never intended to feel that again.

I was so inexperienced, I didn't even know where to start and so was left to chance moments where some morsel of information was mentioned off-hand in some setting.  I sometimes went to church with my cousins or friends, but it was SO over my head, I hadn't a clue what anyone was talking about.  I guessed that the basic story of Jesus was covered in Nursery class, except at MY church, so I wasn't ever going to get it in a class for anyone older than 3.

In time, my family stopped attending any kind of Sunday service (just so you know, we went to the Unitarian Church till I was 8 and then to some group that had no children's classes after that) and in 7th grade they said I could go to any church I wanted.  I chose a REAL church.  One with stained glass windows and a minister in robes, and a choir and crosses and pews and hymns and prayers and stuff like that.  I went to every conceivable church sponsored event I was allowed to attend.  I did everything with gusto.  Except ask questions.

I had only to ASSUME that what I heard was important and true, because I still didn't understand much of it.  I blamed it on how I'd missed all the basic stuff all the other kids already knew.  It never occurred to me to ask my parents - they couldn't know anything, since they never told me about Jesus.

YOU'VE GOT TO BE KIDDING!

Imagine my alarm and disgust a year and a half later when I listened to my minister admit he was in the middle of a "faith crisis" and no longer felt he could stand and lead his congregation because he wasn't sure what was true anymore.  No wonder his sermon's were so uninspiring!  Sheesh!  I never went back to that church.  And now I wondered if there was a church where I could learn about Jesus and learn how to follow him.  I was a detective who had no leads for four years and had been following the wrong lead for nearly two more years.  What a waste of time!  Now I was more leary of churches and ministers and the folks who went there and listened to them.  Were they living their religion?  Did it make a difference for good in their lives?  By now I knew I wanted to know the truth about Jesus Christ.  I knew he was very important and who I wanted to follow, but I really REALLY didn't know how, and didn't seem to be getting very much more information than that.

I got a step closer in High School through Young Life, but after their initial introduction to Christ, they have next to nothing else to say - I got reintroduced again and again for three years, as if they had Alzheimer's and didn't realize they had already introduced me to Christ for the first time ad nauseam. I needed more than an introduction and wanted it from some source that had some type of path one could follow that really changed lives for good.

HELP ME, I CAN'T STAND SO MUCH DISAPPOINTMENT!

I was so frustrated.  No church I attended had what I was looking for.  Either the people were unfriendly, the minister dismissive of a teenage girl, or they simply weren't willing to presume to tell anyone with any kind of authority of an actual path to follow Christ. I prayed fervently and took one last shot that failed to deliver.  I felt so lost.  Within a month or two I started hearing about "Mormons".  I'd known one Mormon and thought it an excessively strict lifestyle and had no interest in it.  But my sister was checking it out way off in Florida.

One thing lead to another, and just before my 17th birthday, I was baptized into The Church of Jesus Christ of Latter-day Saints.  I had a rocky start for two weeks, but then I knew I had found all I had been searching for since I was 8 years old.  Now I knew why the world as I knew it all celebrated the birth of that one baby, and why such a famous painting by such a famous artist of someone's last meal was recognized the world over at a glance!  And I have never looked back.

I can't help myself, I must share, this marriage between one of my favorite screen characters and the man whose artwork changed my life forever: 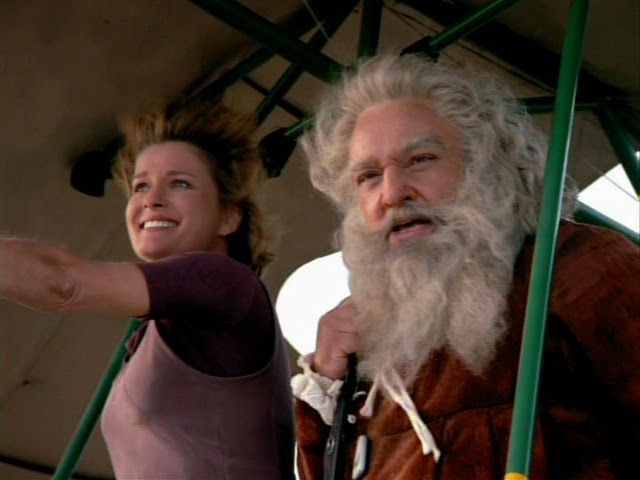 WATCH THIS EPISODE OF STAR TREK VOYAGER ON NETFLIX